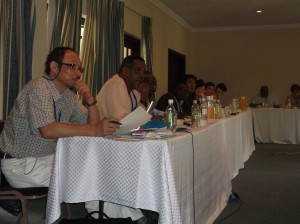 At the Harare Forum focusing on Southern Africa, there were 8 presentations, including the keynote speech, made by African researchers as well as 7 by Japanese researchers. There were also 3 African and 4 Japanese participants from the first Nairobi Forum, which had focused on East Africa, and much lively and varied discussions were exchanged as to what constituted the African Potentials to be utilized in conflict resolution and coexistence realization.

Building upon what had been achieved in the Nairobi Forum, the participants in the Harare Forum brought with them short essays of 2000~3000 words in response to following 5 questions we had posed to them beforehand, which were full of personal insights from research in the field. This method was designed to facilitate even more focused discussions on site. 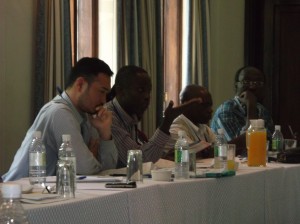 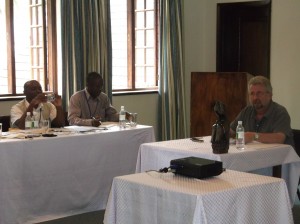 The Harare Forum went as follows:
The project leader, Itaru Ohta opened the forum with an overview of the project. Next, Dr. Intiso Gebre of Addis Ababa University gave a critique of the Nairobi Forum as well as the project itself as a whole. This was followed by the keynote speech by Dr. Sam Moyo, former chairman of CODESRIA and leading scholar on world land reform. Professor Moyo provided a brief review of the contemporary agricultural history of the African Continent to point out its multifacetedness as well as several common themes, then highlighted the characteristics of conflict in Southern Africa, setting the course of discussion for the entire forum. 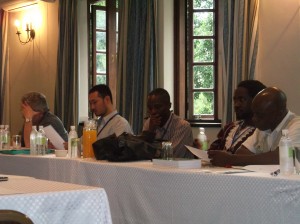 A total of 14 presentations were organized into 5 sessions. The topics ranged from land reform, autochthony, power sharing, regional cooperation, reconciliation and social healing, everyday conflict settlement, to spirituality and even other themes. Poignant episodes and insights were exchanged on the utilization of the African Potential for conflict resolution and realization of coexistence, as well as the characteristics of phenomena pertaining specifically to Southern Africa.

1. What are the (unique) conflict patterns and the issues to be addressed in Southern Africa?

2. What are “African Potentials” operating in conflict resolution and coexistence?

3. Where can “African Potentials” be utilized for conflict resolution and coexistence?

4. What kinds of articulation between local practices and formal mechanisms (state structure, regional organizations, etc.) can be envisioned?

5. Some resonance between “African Potentials” and “Asian potentials”?

(4) 14:00 – 14:30 Yoich Mine (Doshisha University)
Sharing and dispersing power in the African perspectives: A research note on African Potentials
(5) 14:30 – 15:00 Yoko Nagahara (Tokyo University of Foreign Studies)
History as an African Potential: ¬Conflict and Reconciliation in Relation to Namibia’s Colonial Past
(6) 15:00 – 15:30 Mitsugi Endo (University of Tokyo)
African Potentials in the context of Southern Africa
15:30 – 15:40 Comments on the Session 2
Edward Kirumira (Makerere University)
15:40 – 16:00 Break

◎Session 4: Land and Conflict in Zambia

This entry was posted in internationalsymposium-en, research_activites. Bookmark the permalink.